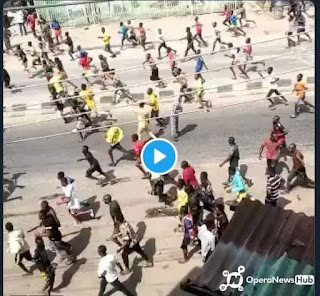 Everyone in lagos has to be very careful because the notorious cult group “one million boys” have been terrorizing some parts of Lagos. Some days back they attack and loot the residents of Aguda, Ikoto, Surulere to mention a few.

For days now,the residents of Lagos mainland have been going through lots of robbery attack lately by two gangs called ” THE 1 MILLION BOYS ” and ” THE AWAWA BOYS “.

This has prompted all the residents of these affected area to form a Vigilante group. )(using their cutlass, spare tire etc).

The one milion boys came to Gbagada and robbed,taking people’s properties and causing havoc.They were also chased out of lagos suburb, Oworonsoki.
The area boys in mushin decided to write a letter to the on million gang,inviting them for a play…..
Winks.😂. As at today being monday,they came to mushin and was chased out…causing serious havoc and people running for their lives. This is the letter written to the 1million gang by the Area boys of mushin.

The menace of the 1million boys robbery gang in Ogun state especially Lagos state can not be emphasized.
God will keep protecting us all.  But let us all be careful and vigilant.